There have been many styli developed for both iPads and android tablets alike, but so far there have been only a limited selection in the market with pressure sensors. 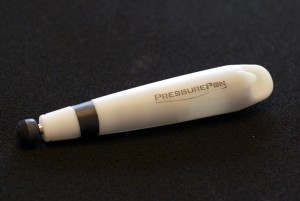 For the artists who want a cheaper way to using their tablet like a portable Wacom tablet with a screen, the PressurePen is your solution.

The brainchild of web developer Charles Mangin, his creation is something that sounds very promising. This pheripheral plugs into a tablet’s audio jack, the stylus sends a tone to the tablet to let it know the pressure level. It has at least 1000 levels of pressure sensitivity.

As far as its design goes, it might not look like the most elegant stylus, and it does look quite bulky to hold. Of course, it all depends on personal tastes, as sometimes a heftier pen is better to hold than a skinny one. This is also a tethered device, but on the upper hand it means you’ll never lose your pen, as long as it is plugged into your tablet.

So far the PressurePen is being developed for iPads, but Charles is planning to make it compatible for Android tablets as well. Both software and hardware will be open source, so users can endlessly customise or improve upon the orignal design.

The PressurePen is going for US$60 completely assembled, and US$30 in kit form, though you will have to print your own 3D casing for the pen. The project is being funded through Kickstarter, so go and pledge by May 31st.

I am really interested to see how well this will work. It certainly looks like it could beat all the other commercial styli that I have seen made for tablets. I also love the fact that it’s all open source, and I can already see the potential”upgrades” for the pen.